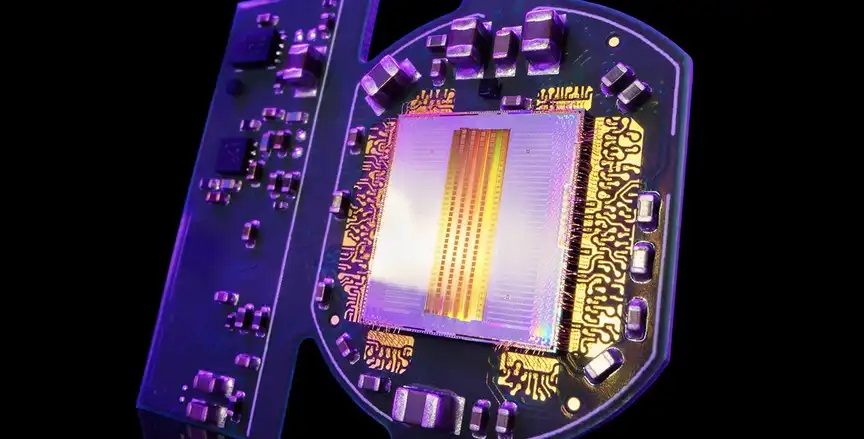 Ouster’s L2X digital LiDAR chip, which powers all of their Rev 06 OS series LiDAR sensors, is the most powerful, high-performance chip that they have produced to date.

Capable of counting up to one trillion photons per second, and outputting up to 5.2 million points per second, the L2X system-on-chip (SoC) continues Ouster’s journey along the Moore’s Law curve by doubling the maximum data rate of their sensors. Dealing with the logic and signal processing on the sensor, the L2X can process both the strongest and second strongest returns of light for each pixel.

With industry-leading reliability, IP68/69K ruggedness, and full dual returns for even richer point cloud data, Ouster LiDAR sensors with the new L2X chip deliver high-performance 3D perception and operations in even the most challenging environmental conditions.

This simplified, integrated architecture delivers high performance, reliability, and affordability.  Ouster’s CMOS approach means that this performance will continue to improve for years to come.

The latest generation of the Ouster custom CMOS SoC, L2X features a redesigned ASIC that enables full dual return processing capabilities and is equipped with extremely sensitive SPAD detectors capable of counting up to one trillion photons per second.

Able to process both the strongest and the second strongest returns of light from each pixel, LX2 doubles the maximum number of points detected to 5.2 million points per second. This richer point cloud, combined with a wide optical aperture, increases the accuracy of object detection, especially through environmental obscurants, such as dust, smoke, or wire fencing, ensuring machines operate safely and efficiently even in the toughest conditions.

By consolidating the complexities of analogue LiDAR onto a single silicon CMOS SoC, Ouster has dramatically improved performance while reducing costs over time. Ubiquitous technologies, such as computer processors and digital cameras, have all followed this same exponential improvement curve, known as Moore’s Law. Ouster’s LiDAR technology progression along Moore’s Law curve delivers improvements to performance and cost, that will help to make LiDAR ubiquitous.

Since the launch of the OS1-64 in 2018 Ouster doubled the resolution of its sensors in two years, from 64 to 128 channels, with the L2 chip to develop the highest resolution digital LiDAR on the market. The L2X chip doubles that performance yet again, pursuing the CMOS SoC roadmap and demonstrating the exponential improvement potential of digital LiDAR.

Rev 06, the newest Ouster hardware release, is powered by the L2X chip and equipped with the latest Firmware v2.2. Rev 06 introduces full dual return capabilities, doubles the signal processing power of our sensors, and is the most rugged and reliable sensor Ouster has built.

In real-world operating conditions – whether a robotaxi driving on a foggy morning or an excavator operating in a dusty construction zone – sensors must not only be mechanically reliable and robust but also reliably output high-quality data. With the new L2X chip, IP68/69K ruggedness, and richer dual returns point cloud data, Ouster LiDAR delivers high-performance 3D perception in all weather and terrain conditions.

Rev 06, powered by the L2X chip, improves Ouster LiDAR sensors ability to detect objects through obscurants such as rain, fog, dust, snow, and even thin, delicate objects like a wire fence. By processing both the strongest and second strongest returns of incoming light the sensors can more accurately detect partially obstructed objects.

The reliance of cameras on receiving ambient light for each pixel means that they are unable to detect even partially obstructed objects. In contrast, Ouster LiDAR sensors utilise a large optical aperture and advanced digital processing via the L2X chip to enable them to penetrate obscurants like rain, fog, and snow that would adversely affect the performance of cameras.

From operating autonomous mines in dusty open-pits in China, and vehicle-based mapping in the Canadian snow, to detecting pedestrians at outdoor intersections, Ouster sensors must reliably work all of the time, through the most rugged, extreme environments and terrains.

Additionally, the simplified digital LiDAR architecture dramatically reduces the points of failure from thousands, as seen in analogue LiDAR, to just two chips and one moving part. This inherent digital LiDAR advantage, combined with a focus on reliability, results in exceedingly rugged and reliable LiDAR sensors.

The L2X chip is a major milestone on Ouster’s product roadmap. They have redesigned the chip to significantly increase processing power and double the maximum data output to provide even richer, dual returns point cloud data.

Combined with industry-leading reliability and IP68/69K ruggedness, the latest Rev 06 sensors are an ideal choice for any outdoor application across automotive, industrial, smart infrastructure, and robotics.

Want to learn more about LiDAR and how to optimise it for your application? Level Five Supplies LiDAR training courses are the solution.