Experienced, well connected, on a mission. 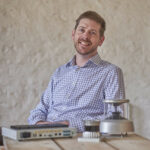 Alex is the founder and CEO of Level Five Supplies. He co-created Self-Driving Track Days, the world’s first autonomous test track and training events, and supported the development of AutoSens, the world’s leading automotive perception technology conference. A former media professional, Alex spent more than a decade working in TV, including five years at the BBC where we contributed to Webby and Emmy award-winning projects. He’s been a board member in several organisations in the transport, charitable and private sectors, enjoys playing cricket for his home town of Frome and plays county-level Badminton.